Anverel Herjor, a half-elven ranger from Haemil that was last seen departing to explore the Iron Mountains in search of the Shrine of the Summoner. Strapped to his belt, hung an ornate dagger rumored to be Brasäd, The Eternal Fire. The dagger was an heirloom to his family that was thought to have been wielded by a godling during the ancient wars among the immortals. 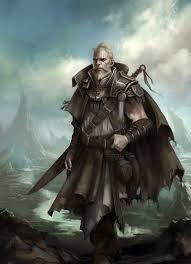