God of the Skies

Calledrym, who is often represented as a bird of prey, is the self-appointed leader of the gods. He is wise but domineering, and he is quick to judge. While he represents all that is good in leadership and nobility, it is his wrath that often results in theocratic cultures that are lead by authoritarian and corrupt disciples.

The Tempest Eternal is the official faith dedicated to Calledrym in Haemil.

Calledrym will grant additional spells to his disciples that show a special dedication to his causes; namely ruling with a strict adherence to law and order, as well as, destruction of all undead.

After the elven pleas for intervention were answered by Faenithol, the Devoted, it was Calledrym who returned from the void and commanded the armies of the Ealintaine against Kiravor and Gaerhun in the Godling Wars. With the help of Teysura and his loyal companion Mylesar, he built Earthenwork, a majestic fortress carved from the Iron Mountains. Calledrym taught the elves to take arms against Kiravor, but Mylesar saw the great numbers of men and brought them into Calledrym’s army.

Calledrym’s daughter, Aerista, the True, sacrificed herself for the horselords of the Plains of Haemil. Her essence was absorbed by the great chieftain, Thullan, forever changing the mortality of the men and women of Haemil. Following the Godling Wars, Calledrym entrusted the protection of Earthenwork to the newly crowned King of Haemil.

Calledrym finally defeated Kiravor and sent the evil god back into the Void. Following his victory, the remaining Ealintaine deferred to his leadership.

Calledrym was the fourth immortal to have emerged from the Ether when the world was first made. He looked down upon the world and marvelled at what Teysura had done. He smiled at the Mother and said, “I shall encircle your world and cool her days with my breath and wash her with my tears. The clouds shall be my embrace, the thunder my voice and the lightening shall be my wrath.”

Whether Calledrym said those words upon first seeing the world, we shall never know. However, we do know that he claimed dominion over the skies when the Great Mother, Teysura, brought the land into being. He is the most powerful god in the Ether, and, as such, receives homage from all of the Immortals. In the ethereal realm, the will of Calledrym is second to none.

Calledrym is the god of the sky, and he perceives all that happens upon Esteparon. He sits in judgement upon us all. It is said that the priests and priestesses of Calledrym often hear the voice of Calledrym upon the wind. The voice, soft as a whisper, will deliver the god’s edicts and proclamations to his followers. Only the devout shall hear his voice. The unworthy will hear only the wind but his judgment shall bind all.

When the gods first took to war upon Esteparon, before the birth of the mortals, it was Calledrym that led the armies of good against Kiravor and his blackened heart. When Kiravor was finally cast down, it was Calledrym that other gods heralded as their king. While many of the gods continue to swear their allegiance to him, their priests see Calledrym as a tyrant who rules the other gods by force rather than will. 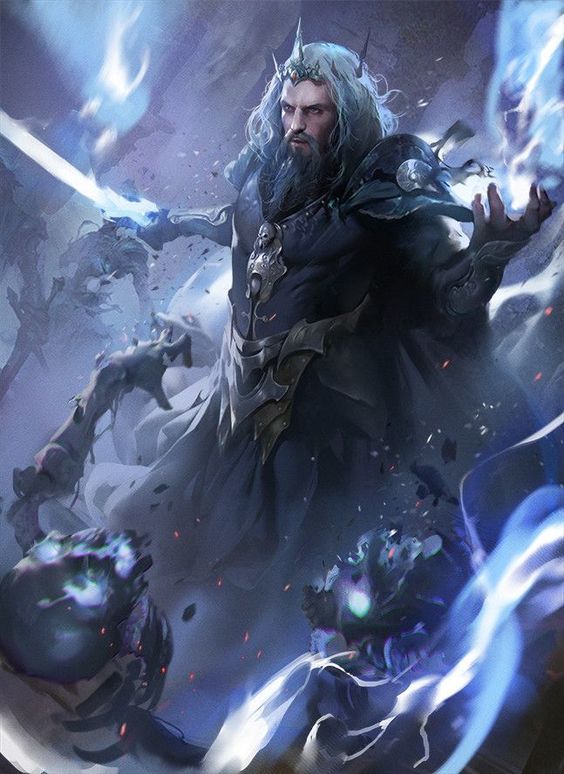