Goddess of the Heavens

Dasyra sat in the void a long time before coming into the ethereal realm. She created the stars and stood within them watching the world turn. At long last she, entered the world to inspire hope among the elves during the Godling Wars. She wielded the Crystal Scythe forged by the first noble elves and heated from the lightning of Calledrym.

Dasyra created the gnomes and other fey although the cause and timing of their origins are often debated.

Dasyra was the first and only Ealintaine to die in the Godling Wars. Following her death, the other Ealintaine only came as avatars of themselves. Dasyra had openly attacked Gaeruhn and sliced open his belly releasing the sun. Kiravor killed Dasyra and Selefahn placed her essence in the skies as the stars. Over the ages, she regained consciousness and began to gather disciples. Hoping one day, to regain form and continue her fight against Gaeruhn.

The heart of Dasyra’s power is that what has been lost might yet return in new and glorious forms. From her example, mortals learn that our good deeds may reverberate throughout Time. The stars remain both sign and seal of her great passion. Not only do they inspire us to devote our lives and deaths for the greater good, but they also set the wheel of the seasons and tug at our destiny. Beneath the wheeling stars, the arc of the history bends towards justice.

Worship of Dasyra is most prevalent among the noble elves, although pockets of worship among the Broanin is fairly common. They tend to fall in one of three groups. Those that focus on sacrifice, serving others throughout their lives. Secondly, those that fight to protect the weak. Finally, those that eagerly wait for the goddess’s return to glory.

Sâ Rrœtet es Dækœrragh is a small faith of the paladins of Dasyra, the Shining Star, with no established churches or temples. They are spread across the world in small bands dedicated to the goddess. They are commonly referred to as the SRD, an acronym for Sâ Rrœtet es Dækœrragh. This old, draconic phrase is loosely translated as “Her Order of the Scythe” or “Her Faith in the Scythe”.

Divine Obedience: Perform an act of charity for someone you do not know. If there are no strangers to whom you may be of service, you must gaze upon the stars, praying to Dasyra, and contemplating how you will inspire hope or defeat evil.

You devotion to Dasyra has prepared you to sacrifice all you hold dear. You guard and protect the weak.

The radiant power of Dasyra shines through you. You are a shining beacon of hope.

The courage and determination of Dasyra is reborn in your every action. You take the fight to your enemies.

The paladins of Dasyra are ardent defenders of their faith, wandering the free lands and instilling hope in communities that better days will come. They serve as an example of self-sacrifice and dedication to a cause. They will offer mercy to those who repent, but will not hesitate to destroy or kill those that refuse to change or that otherwise seek to harm another. They are aggressive and strong willed warriors that take the fight to their enemies rather than wait and defend.

I give myself to the Shining Star who gave of herself for the world;
Standing ready to take arms against those that come in the darkness.
I will be vigilant and ready to unleash the radiance of Dasyra upon the world;
Laying down my life for weak and impoverished, so that they may find hope in the night.

Though Elanil is the Last-Born of the gods, Dasyra is the last of the gods to be known by the mortals. Even Faenithol left the Void before she did. Though last to come, she is our greatest friend amongst the pantheon. This friendship springs from the fact that she lives and dies as we do. She shares in our mortality. This makes her unique amongst the gods.

It is hard to imagine; but, when the Godling War began, the stars did not shine in the night sky. The night was ruled by Kiravor alone. It was a time for fear. During the Godling War, much was lost. Faenithol came and preserved the elves and taught all mortals how to pray, yet that did not restore what had been destroyed. More mortals died in the Godling War than those that now live. Somethings were preserved, and some places were safe, such as the Rynin Sea, but elsewhere all that lived was given over to the whim of Kiravor and the hunger of Gaeruhn. The more Gaeruhn consumed the more he hungered, until his hunger grew so great that he swallowed the sun. In the darkness, Kiravor grew fat on our fear.

It was during this never ending night, that Dasyra stepped into the mortal world from the Void. With her blazing sickle she spilled open Gaeruhn’s stomach — distended and blackened from the heat — and released the sun. Gaeruhn fled from her terrible weapon of light, but Kiravor had grown strong in the darkness. So strong had he become that that he could darken the newly freed sun. He did not fear her sickle for he is fear itself.

Their battle was long and terrible. The world was reshaped by their blows. Where her blood touched the earth, the earth quickened and the gnomes were born. When her sickle tore into his miasma, corruption spilled onto the lands and from it crawled nightmares and demons. Finally, Kiravor smote her ruin, and cast her dismembered corpse into the sea. He could not abide the touch of her sickle, and so he cast it into the night sky where it still shines down on us at the Evening Star.

There is much scholarly debate why Dasyra did not return to the Void when her Avatar was destroyed and why her death was a mortal death. Some speculate that when Kiravor slew her, he slew part of her divinity. Still others say that because she directly entered into the world, the ether had not quickened her power as it had done for her brothers and sisters. In the absence of facts, any fool can speculate.

What we do know is this: Dasyra died a mortal’s death and Selefahn guided her soul into the ether. We also know that she remained in the ether for a time. During this time, the stars kindled in the Heavens forming the twelve constellations. We know that when the twelfth constellation cohered that Vra’lithe left the ether to do battle with the brothers — Gaeruhn and Kiravor. We know following his example, the rest of the pantheon clothed themselves in substance and took the field against the brothers united at last.

Since that time, the wise have been able to read fate in the constellations. The wise tell us that the stars are the bright souls of the virtuous returned from death to guide the turning of the world. The souls of the truly blessed join the stars and add to their luster. The wise tell us that in the time of our greatest need Dasyra will return to us as a mortal woman where she will live and may die to guard our last hope. Until then her soul blazes in the Evening Star, granting grace to her faithful. 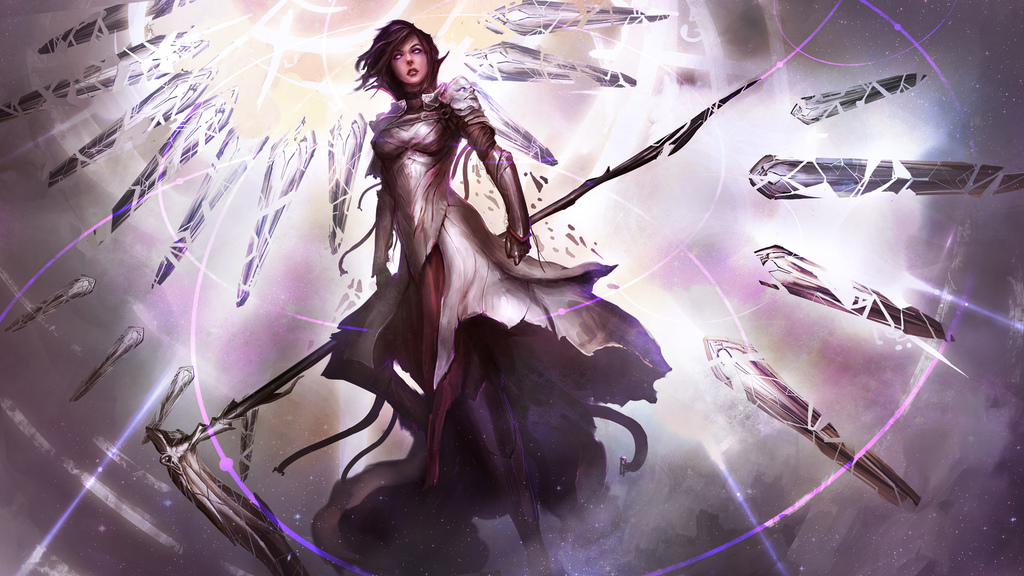