Goddess of Hedonism and Madness

Elanil was the last thought of Teysura to take form. She is whimsical and will often interact with her clerics giving them recipes and ideas for entertaining and providing a bounty for guests to the point of ecstasy. She taught the elves the art of making wine and the dwarves of making beer and ale.

During the Godling War, she was held captive by Gaeruhn for thousands of years and was forced to develop alchemy and poisons. She was driven mad watching the results of her discoveries upon the mortal world. Eventually freeing herself, through insights known only to her, she returned to the Ether and has become the inspiration for hedonism and pleasure.

Disciples of Elanil receive the Improvised Weapon Mastery feat at 6th level. They lose all other weapon and armor proficiencies and are forbidden to use them under any conditions.

So did Elanil hide the truths of alchemy from Gaeruhn as he bore down upon the frail goddess. His burning touch scorched her soul until she could bear no more and succumbed into a fugue. In her trance, she spoke of the essence of potions and poisons and Gaeruhn took them all into his mind and terrible things he wrought upon the world.

Last-Born Elanil took form from Teysura’s delight in the world. She revels in sensation. In her power are all ways in which the spirit can take pleasure in the flesh.

Elanil has been known by many names: Last-Born, Giver of Gifts, the Blessed, the Joyous, and Keeper of Mysteries. As the Giver of Gifts, she taught the elves to make wine with dancing feet. She inspired the dwarves to seek out what is best in life, and she taught them the brewing of beer to bring solace in defeat and grace in victory. She gave the secrets of seasoning to the halflings, and since then their feasts have never ended. She taught the secrets of alchemy to hobgoblin and gnome alike. To humans, whose lives are flickering flames, she gave them the zest and zeal that marks their numbered days. Under her tutelage, mortals came know and relish all carnal joys; and, in her mercy, she taught them how the pains of their flesh might be eased.

Once, Elanil was known as the Blessed because the spirits were as happy to receive her as the mortals were. Her generosity inspired their own; they were eager to see what pleasure she would discover in that which lay within their power. That is all spirits save one. Gaeruhn, Master of Flesh, is envious of the joy she took in what he claims as his own. What he would rule and consume, she enriches. In Elanil, there is power that springs not from mastery but from experience. This is why Gaeruhn believes that Elanil is a dagger that Teysura meant for him: a daughter who would usurp his place in the Ether. He swore to take vengeance on the Sacred Mother by destroying her Last-Born daughter.

Gaeruhn took this vengeance during the Godling War. He seized Elanil. He tried to gobble her up, but Elanil’s flesh ever regenerates. In her, there is a vitality that Gaeruhn could not consume and that Kiravor could not snuff out. No matter how he tried, Gaeruhn could not steal from Elanil as he stole from Vra’lithe. Failing to destroy Elanil, he instead enslaved her. Where once she cultivated all experience that brings happiness, under duress Elanil was forced to cultivate banes of the flesh: terrible poisons and wasting diseases.

As the Godling War raged, a seed of madness grew in Elanil as she watched how the perversions of her gifts in Gaeruhn’s hands left terrible wounds in the mortal world. She could not reconcile what was with what she believed should be. None of the spirits who once named her the Blessed came to relieve her suffering. Knowing that death was the one gift denied her, she sought escape from knowing through her arts.

Neither legend nor history tells us exactly what Elanil brewed, but all sources agree that in this nostrum she found truths that are beyond the scope of powers of the Divines, secrets that not even Amus comprehends. These terrible truths released not only her mind from suffering but also her flesh from all bonds. Now Elanil dances unseen paths, moving widdershins through both the mortal world and the Ether.

After her escape, the spirits no longer called her the Blessed because they fear the truths that her madness revealed to her. None are willing to pay the price that she paid for her transcendence. They named her instead the Keeper of Mysteries. Although she is still welcome amongst them, her suffering and escape remind them that even the great spirits are not free from consequence.

In this, we mortals possess greater wisdom than the spirits. We know that with one hand Elanil offers us all the pleasures we can suck from the marrow of life and in the other a surcease for all that pains us. This is the greatest gift she has ever given us: both the freedom to do and the freedom to not be, passage through either through the door of madness or through the door of death. 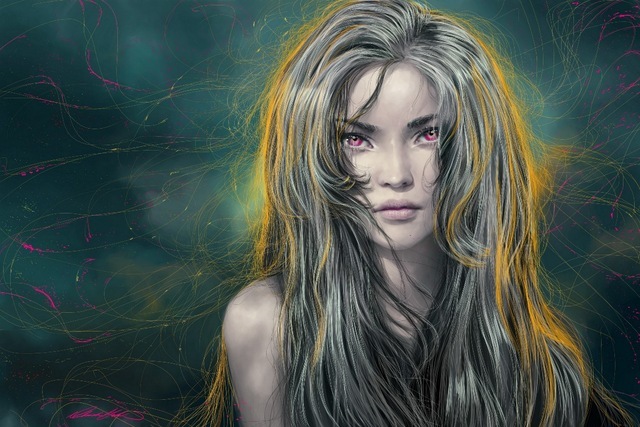