Kiravor, the Harbinger of Death

Although Calledrym, Mylesar and several others of the gods eventually defeated him, Kiravor survived and now rules Midian a dark corner of the Ether.

Kiravor is known for commanding the undead armies during the Godling Wars.

When Amus called out the Ealintaine and coaxed them out of the void, Kiravor hesitated. His heart desired power and destruction, but he feared the ethereal realm for he had little control over it. But when Teysura ventured out to see what Amus had found, Kiravor followed her and he took delight in what he saw.

Kiravor felt the ether enter him, and he felt its raw power. The ethereal energy radiated with power, and he felt it swell within his being. In a magnificent burst, Kiravor’s desires took form as pure force energy. Amplified by his hatred for all things living, he destroyed all the Teysura had first envisioned.

For a time, the goddess did not reimagine the world, but she bid her time until Kiravor grew weary of the ethereal realm and returned to the void where he sought out his brother, Gaeruhn. Believing that Kiravor would not return, Teysura smiled and shaped the Known World from her visions and awoke the first elves…

…Soon Kiravor and Gaeruhn returned to the ethereal realm and saw what Teysura had made. The brothers laid waste to the world and its first inhabitants. Kiravor drank the life of the elves, and watched as their soulless bodies come to life to do his bidding while Gaeruhn feasted on the still living flesh.

It was Calledrym that finally put an end to the tyranny of the brothers. The mighty god called forth, his friend, Mylesar from the ether and together they taught the first elves to take arms against Kiravor. They fashioned bows and stung Gaeruhn with their power for the first elves drew the ether into each arrow. The elves would have defeated the Flesh Eater had Kiravor not given him an amulet to protect him from the missiles. Gaeruhn continued his feast for another 100 years before Calledrym and Mylesar heard the elven pleas to intercede. The two great gods came forth again from the ether and defeated Kiravor and his younger brother, sending them fleeing into the void.

Kiravor, the Harbinger of Death 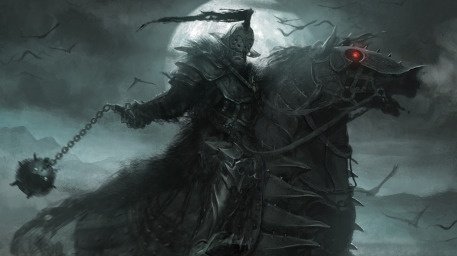