In the beginning, Korlez was a very weak deity in the Ether. However, through deceit and deception, he has gained much power and prestige. Korlez takes an infinite number of forms at any moment. Every mortal or immortal sees him differently. To one mortal his may be that of a physically deformed humanoid with four arms with the majority of his flesh appearing to be melted and dripping from his gaunt frame. To another, he may appear as a beautiful human, standing over ten feet tall dual wielding bastard swords made of pure energy.

Korlez loves mortals beyond all measure. Hense, his disciples come from nearly every race and are very devoted to him. The implement of Korlez is a highly polished disc of onyx. The disc is usually worn as an ornamental piece of jewelry. Disciples of Korlez must spend at least one hour during the night in silent worship. This worship is always done in private. Korlez forbids any type of arcane magic to be practiced by his disciples. Korlez will strip a disciple’s powers immediately upon breaking this command and will encourage other disciples to hunt down and destroy the blasphemer.

Korlez’s downfall is that his love for mortals has become a deep seeded obsession to give immortality to them. He will stop at nothing to fulfill his desires. HIs chaotic nature can be seen as being unwilling to be constrained by the strictures of Amus, and his evil nature as the willingness to use whatever means he can to “better” the object of his terrible love: mortal men and women.

Prior to the Godling Wars, he attempted to breed mortals with beasts of all manners, creating the lycanthropes. Later, during the wars, he tried to breed immortality into mortals. Korlez came upon the Plane of Bone and awaited for the life essences of mortals to pass through the primal plane as Selefahn guided them back to the ether. Stealing the essences, he infused them with his own power that he drew from the Ether. However, because immortality was not Amus’ plan for humanity and because humanity bears the mark of Gaeruhn’s corruption, his descendants became a perverse cross between mortals and the godling, himself. These offspring were the first demons, many of whom still dwell upon the Plane of Bone, feasting upon the lost souls of mortals that shun Selefahn’s path to the Ether. Many more of the demons sought to return to the Material Plane or the freedom of the Ether.

Korlez remained on the Plane of Bone following his second failure for his beloved mortals. Conspiring for ages, he was there, hidden from the eyes of the Magi when the Binding of the Ether came to be. Trapped on the plane, he can find no way to the Material Plane as the leyline of Selefahn is beyond his reach, and the Ether is but a trap that will close upon him should he enter.

The implement of Korlez is a highly polished disc of onyx hallowed in a ritual known only to priests of Korlez. The disc is usually worn as an ornamental piece of jewelry.

Natural Weapons. Divine casting disciples of Korlez can grow claws at will at 1st level. The claws do 1d4 damage for a medium sized humanoid. The damage die for warpriests follows their normal progression. For clerics, at 8th level, the claws increase by one die; at 12th level, the priest gains a 1d6 bite attack; and at 15th level both the claws and the bite advance another die.

Based in the Shadow Mountains to the north of the Vale of Talanor, the descendants of the men of Vyros still struggle against the remnants of Vallen Dynasty. Opposed to any authority beyond Korlez, this faith seeks to find personal perfection and immortality at any cost.

A religious sect of warriors dedicated to the protection of the lycanthropic followers of the Formless.

Disciples of Korlez must spend at least one hour during the night in silent worship. This worship is always done in private with the disciple’s bare chest exposed and holding their holy symbol before themselves. Gain a +4 profane bonus on Knowledge (nature) and Survival.

You shift and transform your shape to please the Formless.

The brutality and savageness of Korlez is full realized in his fighting techniques passed through the ages to his most fervent disciples. Rumors that these techniques have been written in blood upon the flayed skins of the deity’s enemies have never been proven true as few have mustered the courage or fortitude to seek them out.

Whenever you attempt at a combat maneuver check, covered by Powerful Maneuvers, against an opponent, you are considered one size larger than your actual size. Additionally, you deal an additional amount of damage equal to 1d6 + your Charisma modifier.

Of all the Docti, Korlez was born with an understanding form and substance. He understood shapes and size, and taught the first of the mortals to take note of fleeting beauty of the mortal body. He delighted as time passed and the first men grew stronger and the women grew fertile. He recognized the power of flesh but did not covet it. He opened their minds to the endless ideas of transmutation.

But Korlez did not understand time for the great spirit was born before time. Korlez became enraged when he saw that the humans would wither and die in time. He came to Amus and demand that she stop the flow of time so that the men and women that Korlez had taught to alter their form would live forever. Yet, Amus knew more of what was to come and knew that mortality was a gift not a curse. Korlez then sought to fool time and he taught the first humans to alter themselves and live within a false form. But time could not be deceived, and they still perished to Korlez’s dismay.

When his brothers and sisters conceived new life and made the elves, dwarves, gnomes and hobgoblins, Korlez could not conceive life but took a thought in darkness and reshaped mortals into beasts that were part human and part beast. In the cover of night, the great spirit transformed mortals into lycans and made their condition hidden, so that in the light the other spirits would not have known what he had done.

As his mind became more twisted and tormented, Korlez began to hate his brethren and sisters and sought to destroy all that they created as he could not create but only manipulate. 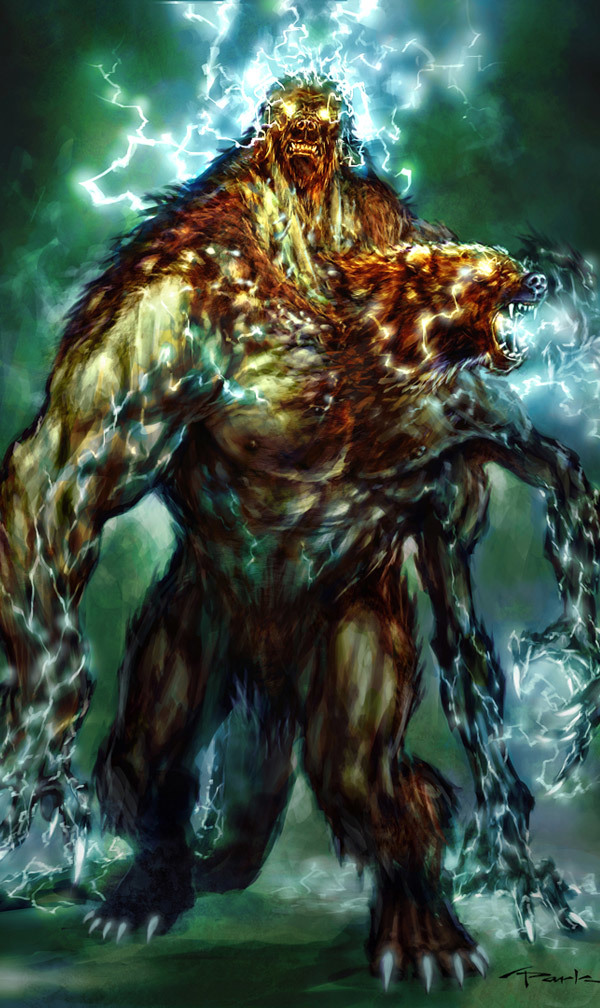