Constable of The Point

Possessed of shoulder-length golden blond hair, with a neatly mustache and beard of the same hue, Marcusic is a young human male of middling height with a physique that clearly shows the effects of wearing heavy armor for extended periods of time. He’s got ready smile, enhanced by eyes the same shade of blue as the sky on clear summer’s day, and a voice that is—in his own opinion, at any rate—quite simply amazing. When ready for battle, the soldier dons a suit of plate armor that covers him head to toe with a layer of Haemil’s finest steel. Even his face is concealed, thanks to the use of a steel mask carved to resemble the snarling muzzle of a ferocious beast.

Marcusic hails from a family of minor note within Haemil for their generations of military service. Founded by a member of the Firebird Clan who turned to the life of a mercenary soldier when certain matters at home didn’t work out satisfactorily, the family has consistently sent sons and daughters to fight—and sometimes die—in the service of Haemil’s people and rulers. One of the traditions particular to Marcusic’s family is their use of music to bolster their allies and cow their foes (Trait: Savant), though magic lurks within their blood as well (Trait: Gift for Magic), and the two talents are often combined in way that also pays honor to their founder’s origins (Feat: Tribal Rhythm). One rather curious ability possessed by Marcusic is his fluency in Sylvan, and he has consistently refused to reveal how or why he acquired it.

Haemil makes use of every asset it has, and even family traditions such as those possessed by Marcusic can find a place under its banner, though there’s always room for refinement (Trait: Maestro of the Society). Using his abilities to support a very small team of soldiers put under his command, Marcusic has developed a desire to become a proper officer one day, and has done what he—and by extension, his family as well—can to ensure that he has opportunities to prove he merits such a rank. With his family investing in a full suit of Haemil’s finest armor—normally assigned to members of the cavalry branch, though any who can meet the exhorbitant price can purchase a set—Marcusic is often found at the front of any fight, assailing foes with hammer, sword, and flail, even as his voice rings out proudly with a song to bolter allies and dishearten the enemy alike.

Some months back, Marcusic began to have the most troubling dreams, in which the twin moons cracked open to each release a set of great, fiery wings from within. The owners of the wings struggled greatly to break free of the stellar bodies containing them, but were unable to do so before a calamity struck them. That calamity was a great void opening directly above the great tower at Talanor, the famed Bright Tower itself. The void stretched forth clutching tentacles of its own substance to rip and tear at the world, the appendages carrying chunks back to be consumed. The wings seemed to draw the notice of the void, which lashed out with all that it had to bind the twin moons and draw them in, and the efforts of those contained within the spheres to avoid this end came to nothing, for all were consumed.

The dreams were noteworthy not merely for their content, but for their consistency as Marcusic had them many nights in succession, making it apparent that while they might be coming to him in his sleep, they were anything but mere dreams. Marcusic resolved to seek out the meaning behind these visions, though he kept knowledge of them to himself, for soldiers who report such things typically don’t remain soldiers for very long after. Another barrier to progress was that his military service left little opportunity for the sort of long-term investigation that such portents would surely require. But in this regard, the Ealintaine seemed to smile upon the young man, as he learned of a special messenger assignment to Talanor itself, and that the assignment would be granted to a select soldier based on merit.

Marcusic set out to secure such that assignment for himself, using means both fair and foul in his efforts, for he saw the end result—access to Talanor, where he might learn the meaning of his visions—as worth the stain placed on his honor. And his efforts proved fruitful, though at a cost in expended favors and enemies made that Marcusic knows he will have to account for in time. Given the use of a swift mount, the soldier found himself on the road, not too far from a duo who apparently had their own tasks accomplish in the distant Vale. 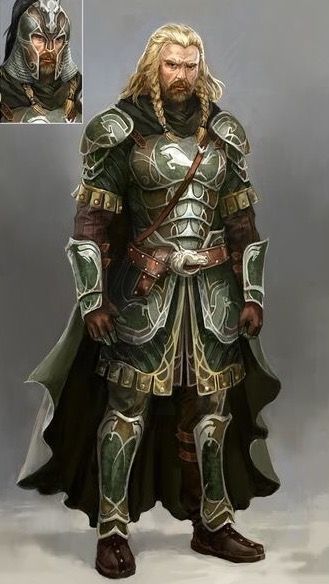