Maryann was a bard from the Free City of Parthis. She is privileged and well educated. She had the means and opportunity to pursue her art for both critical and societal acclaim. Something like a poet laureate — the voice of a people/age.

She became both more pious and more nostalgic as she aged. Lights in the Darkness became something of a famous piece of unfinished art because she died before completing it.

From the Preface of Lights in the Darkness…

“When I was a young woman training my voice with the priestesses of Celestri, I often thought of the renown my skills and gifts would bring me. That hundreds of years from now people would be performing my plays, my songs, and my poems. This would be my immortality: being brought back to life again and again through art. When I was a mature woman sworn to Faenithol, I often thought of all the plays, songs, and poems that I had collected from all across the world in my travels. That just like my arts they too should be remembered and preserved. The thread that connects these two women that I was is this attention to memory.

It is the same thread that connects them to the old woman that I have become. Age has crippled me. It has stolen the beauty of my youth and the vitality of my middle years. Yet, time has not robbed me of my voice. Instead it has refined it into a stream of molten silver. My arts have not lost their ability to move the hearts of men.

To what ends will I turn my arts in my last days before the Herald gathers me in her embrace? Will I leave an epic so that men remember me until the kingship is restored in Firsthaven? No. I will leave a prayer. The heart of Faenithol’s faith is that men and gods thrive together. We improve each other.

Before I step into the darkness, I leave behind this prayer and my hope that by moving the hearts of men I might shake the pillars of the heavens. . . ." 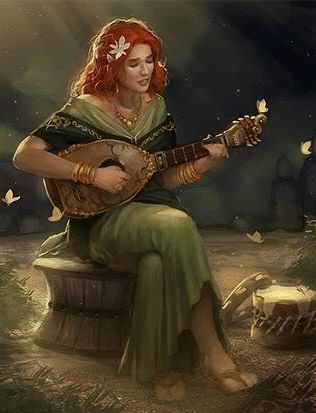