Niyut is a daughter of the Firebird Clan of the First Lands. She is an accomplished half-orc oracle with a twin brother, Truk’tosh.

You can scribe any Necromancy Spells that you discover into the Libre Sanguinem Additionally, you can scribe any Known Spells on to properly prepared bones using Blood Money in place of gold pieces. Certain spells that require unique spell components will still require such components to scribe them upon the bones. (LE4: Storm Hag)

Whenever you use your Ooze Trait SLA, the ability is extended by an additional round. (Water1)

+1 Caster Level for illusion spells from the glamer subschool. For each additional Illusion essence, the CL increases by 1/2. Current: +2 (Illusion1)

Upon command, as an immediate action, you can harness a bit of the power of the cloaker you absorbed to cause a thin sheet of ethereal energy to form rigid wings between your arms and torso allowing you to glide as per the spell at will. (EE2: Shadow Cloaker)

All of Niyut’s figment spells will linger for 1 additional round beyond the spells normal duration. For each additional Illusion essence, the duration increases by 1 round. Current: +2 rounds. (Illusion2: Gnoll Bard)

Armor of the Spirits (1 EP)

As an immediate action, you can call upon the wandering spirits of the world to protect you. You gain DR5/magic for 2 round per character level. For each subsequent life essence imbued, the DR increases by 1. Current: DR8/Magic. This ability increases the character’s EP by 1. (LE2: Gnoll Commander)

As a spell-like ability, you can cast Root. This ability increases the character’s EP by 1. (EE13: Cliff Giant)

As an immediate action, you gain fly 60’ (good) for a number of rounds equal to your character level. Additionally, you gain Storm Rider (Su). A storm hag is considered two size categories larger for the purpose of wind effects. For each subsequent life essence imbued, you gain two additional round sof flight. Current: 11 rounds. This ability increases the character’s EP by 1. (LE4: Storm Hag)

As a immediate action, you can embody the following trait of an ooze for 1 round. During that time, you are immune to precision damage, cannot be flanked nor sustain a critical hit. For each subsequent life essence imbued, the number of rounds is increased by 1, in addition to the Extended Ooze Trait ability. Current: 6 rounds. This ability increases the character’s EP by 1. (LE1: Gelatinous Cube)

The essence of the construct melds with your body giving you added defenses against poison. You can reroll a Fort save vs. poison. This ability increases the character’s EP by 1. (EE4: Tupilaq)

When in dim light, you can manipulate shadows at will as a swift action to create one of the following effects: At CL1, silent image (save DC is charisma-based); At CL4, blur (lasts 1d4 rounds, self only), darkness or mirror image; At CL8 dimension door (self only). The caster level is based on Oracle only. Only one effect can be maintained at anytime, unless she expends 1 EP to activate a new effect. The first effect costs 0 EP, while any stacking effect costs 1 EP. This ability increases the character’s EP by 1. (Shadow1)

As a move action, you gain study target as per the slayer ability. However, this study can only be used as Blood Reader slayer talent. Use your character level as your effective slayer level. This ability increases the character’s EP by 1. For each subsequent life essence imbued, increase the granted EP by 1. Current: 3 EP. (LE3: Gnoll Slayer)

Of Creation & the Greater Spirits by Enasilaor
Collecting of Parts; Living & Dead by Caitlín Ní Daire

Link to Niyut’s entry of the Paizo Forums 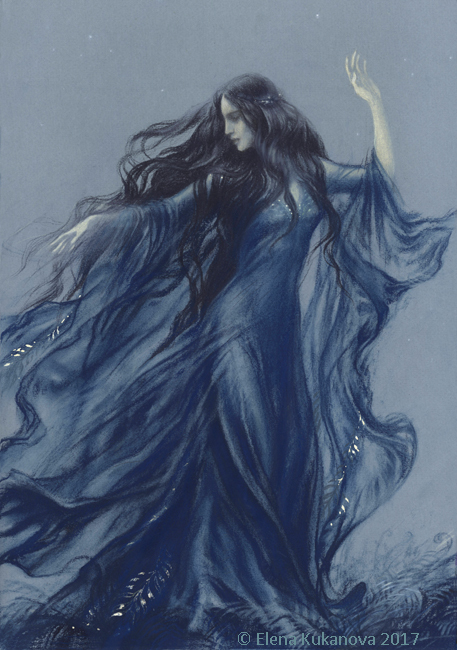