A tall, pale woman stands in a crowd of zombies, robed in painted silks. Though she wears no armor, the undead do not seem to be able to touch her. She dances among them moving with a grace that does not seem entirely natural. . .

Ysildaë is brave and honorable. She is a great lover of beauty. She knows she is neither the most wise nor the most cunning. She trusts that doing her duty and acting rightly will see her through.

She does not shy away from battle even though the sword she carries is broken, but neither does she seek glory.

Her otherworldly heritage is most evident in her hair and her eyes. She knows that her lineage stretches back to when Miravynn walked the earth. She also pays respect to Valthyra. However, she sends most of her prayers winging to Dasyra. Especially in this long night, something about the goddess of the stars speaks to her heart.

A young elven woman sits and reads a book in a lantern-lit garden. The lights of the lanterns shine in her bright golden hair. The book is a new history of the founding of the noble houses by Telen of House Nannaris. The section she is reading concerns the lost House Celes:

. . . While we elves are not the firstborn race, we are the race most favored by the gods. Where humans were corrupted by Gaeruhn, elves were created perfect and unsullied. The gods recognized our perfection and there were many couplings between elf and god during the Reign of the Ealintaine. Of all the elves first shaped by Lorrynor, none were lovelier than Avar, who later became known as the Consort. So glorious was he that the goddess of beauty herself claimed him as her chosen consort.

Their children bore the grace and beauty of their parents, inspiring lust among the greater and lesser spirits. Slowly, a Noble House coalesced around Avar: House Celes. It would not be false to write that at their height more divine ichor flowed through House Celes than elven blood. They were the children, grandchildren, and great grandchildren of the Immortals. House Celes was not only family to the Immortals but also their favored disciples.

Orono Celes was blessed by Valthyra. The smith goddess taught him many secrets of metal. These secrets served Orono well. When Dasyra was murdered by Kiravor, the heavens wept stars. Orono found one of these fallen stars and it sang its name to him. Orono took up the star and forged it into to an elven long blade engraved with its name in its own tongue: I am the Favored Daughter of the Heavens. I am the Song that Fell from the Sky. I am Dance with Me and Strike with Me and Weep with Me when Light Dies. I am neither the Glory of Triumph nor the Rule of Peoples; I am the Never Stilled Whisper of Hope.

Orono wielded Favored Daughter, as the blade became known among the elves, throughout the Godling War. The blade was sundered into three pieces when Orono slew Vardox, the Shadow of Despair, the daughter of Kiravor, on the Fields of Fire. Perhaps the great smith would have repaired this star-blade if the Immortals had not quit the world in the aftermath of the Godling Wars.

The House Celes followed their parents and lovers into the Ether. They left their youngest children and their greatest treasures in the care of the other Noble Houses. These children grew and married into their adoptive Houses when the Celes did not return from the Ether. Sundered from the Immortals, our lives have shortened. It has been more than twelve lifetimes since the House Celes followed the Immortals, yet still in every generation their blood can be seen . . .

The woman closes the book with a snap. I may share the blood of Celes, but I will ever be one of the Ralomenor.

From the interior of the shrine, she hears a soft chiming. The custodian of the shrine stands and places the book on the stone bench where she had been sitting. The song of the Favored Daughter has grown stronger of late. What does her singing portend? She enters the shrine. On the low altar a sky metal sword rests in three fragments. The largest piece springs from its hilt, leaving a jagged edge where the blade shattered half way up its two-foot length. Each fragment glows with starlight.

Much like the blood of the Celes, the sword endures even though it is diminished. She smiles fondly at the sword resting in the shrine. If Orono Celes returns, he will find that the Ralomenor have kept faith in their promises spoken long ago.

Her musing is cut short by a sudden and terrible howling wind. The lanterns are blown out. The shrine darkens except for the glow of Favored Daughter. The sword’s glow intensifies in a burst of radiant light. A woman made of silvery starlight sits on the altar her hands outstretched. The glow that once surrounded the sword now forms a shell around the Ralomenor tower. Outside, the Storm rages. Yet, within the tower’s grounds there is stillness.

The custodian gapes at the starlight woman in awe.

The starlight woman begins to sing in Celestial: Far-daughter of Orono, I will protect you as I once protected him. For decades you have tended me, Ysildaë. Heed my words. Kiravor once again seeks to destroy the world. The elves must once again stand against him. You must take my fragments to Dasyra’s Landing in Talanor. There you will find a way to restore what despair shattered for remember that I am the Never-Stilled Whisper of Hope. Once I am whole, I can aid you for the matriarch of the Ralomenor will be sore beset by servants of the Harbinger.

The sword’s song fades with the image of the starlight woman, but the protective shell of starlight persists until the Storm passes.

Reverently, Ysildaë picks up the fragments of Favored Daughter and wraps the sword in cloth. It is clear what she must do. Every son and daughter of Ralomenor must gather in Talanor.

To Ysildaë’s surprise, the scions of Ralomenor in Greyton do not rally around the words of Favored Daughter whose shards had lost their starlight glow once the Storm had passed.

“Why should we leave Greyton on the say of a broken sword who only you heard, Ysildaë? A sword who is now silent. We Ralomenor are the sworn enemy of the undead. The gods preserved us when so many Houses were lost so that we could defend Kúilœrn. The matriarch would want us here defending the Awakening Tree not harrying off into the wilderness.”

Shilonora Ralomenor is an imperious speaker, one who expects to be obeyed. In this, Ysildaë is bound to disappoint.

“I saw what I saw, Shilonora, and I heard what I heard. This sword has long been our sacred trust and we have our duty to defend and support the matriarch. The sword saved us and charged us with a quest. Where is the honor of our House?”

The custodian turns and gazes out at the gathered members of their far flung House. To her dismay, many of the faces she sees are daunted and dismayed. Several are shaking their heads.

Ysildaë refuses to yield. “Who will brave the long night with me and uphold the oaths of our foremothers?”

“I will come. I sense Dasyra’s hand in this, and the Ralomenor will not be foresworn as long as the stars shine in the sky.”

Ysildaë smiles. Anarin, a priest of Dasyra, is the only Ralomenor in Greuton younger than she. He is bold, adventurous, and always looking for cause. It seems that he has one in her.

“I will also come,” a quavering voice murmurs. A hush falls over the assembled numbers before it it is broken by Shilonora’s outraged objection. “No, Immaru! You are the eldest of our House and a Wind Listener; your wisdom is needed here.”

A nearly ethereal woman looks up from where she is sitting. The only visible sign of her more than seven centuries of life is that ethereal quality. Almost as if she is a vessel of glass through which a light shines.

“If you need wisdom, Shilonora, then listen to Ysildaë. Kúilœrn will live or it will not. The wind tells me that the answer to that trouble is not here. The wind tells me that there are answers to be found in Talanor. I would see my younger sister, the matriarch, before I join our ancestors. If Ysildaë says that Favored Daughter preserved our tower, then I believe her.”

Ysildaë briefly hopes that Immaru’s words swayed the others, but Shilonora inflames their fears with speculation that some undead thing was feeding on Kúilœrn, killing the Awakening Tree, and convinced them that the Ralomenor duty lies here in Greyton.

In the end, only three of the Ralomenor of Greyton leave the City of Towers to meet with the rest of their House that resides in Talanor: an ancient diviner, a hot-headed priest, and a warrior who has sworn to wield no blade until Favored Daughter is made whole once more.

During the many weeks of their journey, the winds whisper to Immaru of dangers before they arise, and when they do she calls down lightening to scour them from the earth. Ysildaë reflects more than once that the ancient wizardess does more to protect the trio than she and Anarin do to protect their ancient aunt many times removed. She suspects that Immaru may have come to keep an eye on “the children,” as she calls them However, Ysildaë also suspects that any woman who is nearly a thousand years old has a great many reasons to do whatever she chooses to do.

Though Favored Daughter no longer sings, Ysildaë feels her guidance in her dreams and when she practices her kata. Her dreams grow more troubled the closer they get to the Shadow Mountains. Anarin seems unbothered. He only speaks of the wonder of seeing Dasyra’s Landing in person. He seems unconcerned with the fate of their family in Talanor. Ysildaë, on the other hand, is very concerned. She knows their matriarch must be alive, for if she were not, then she could not be beset by the undead. But what undead could threaten the ruler of a House devoted to their destruction? 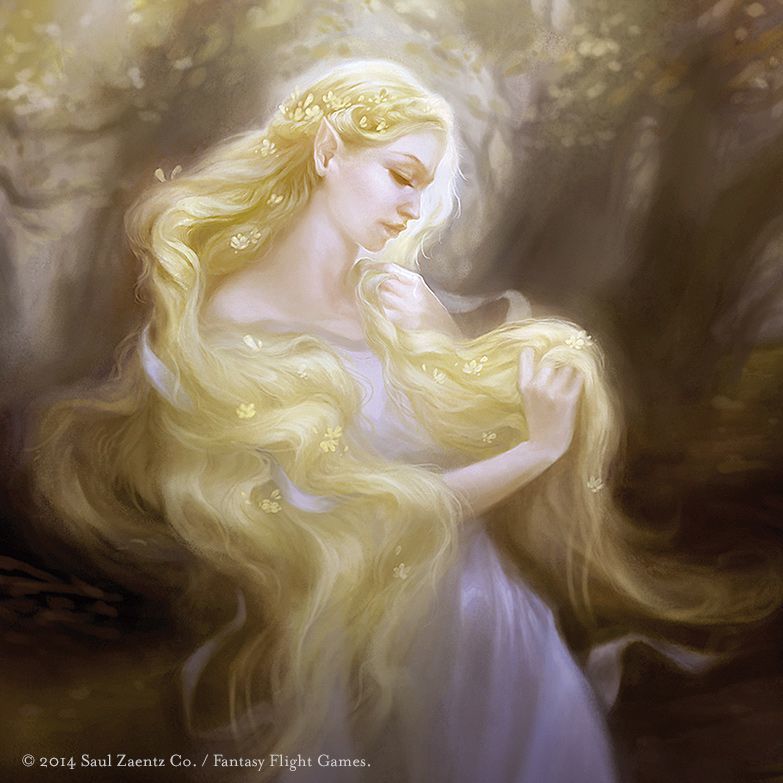