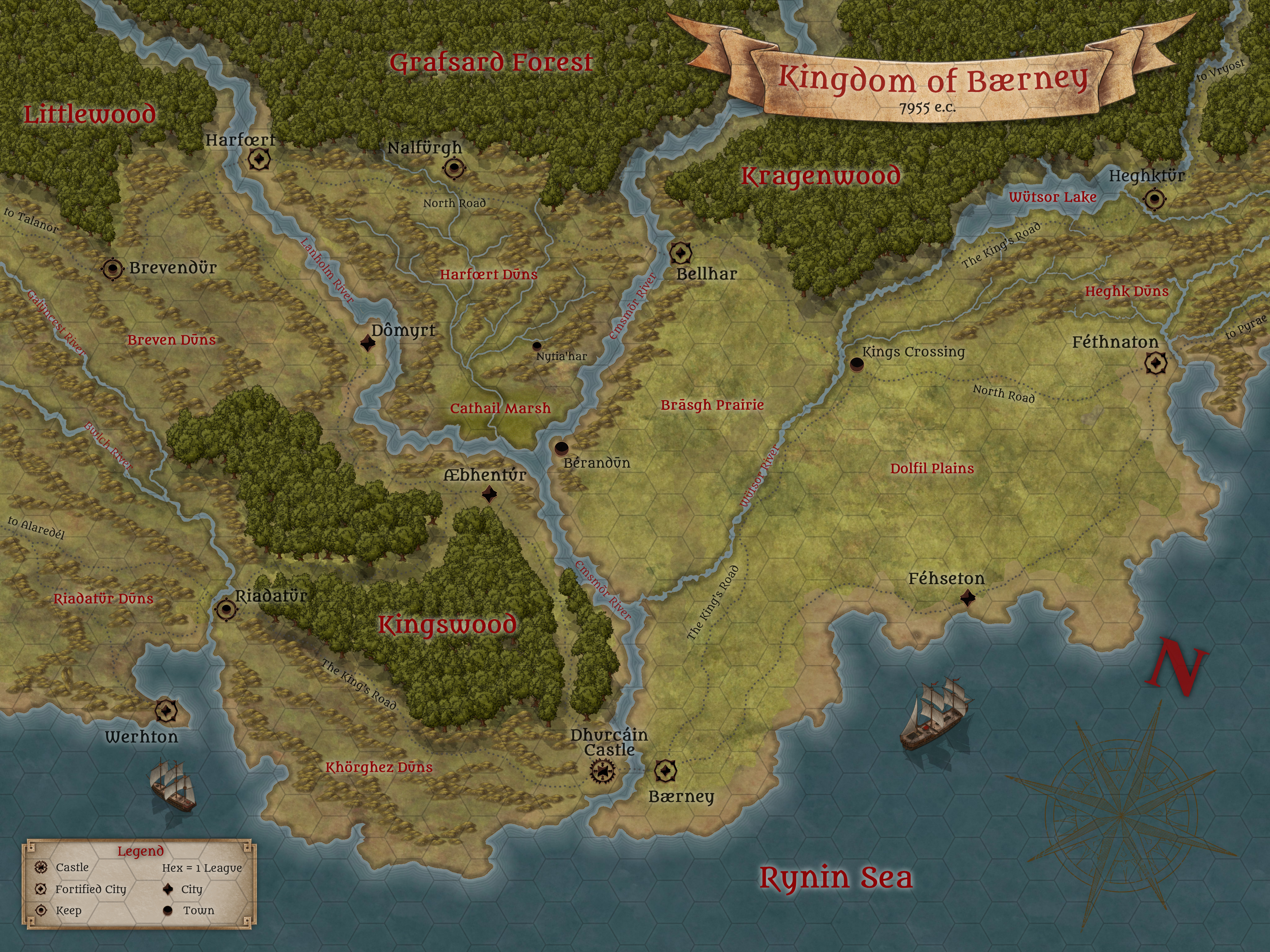 The land is coveted as a small, fertile land between rugged hills to the south and west, dense forests to the north, and a series of deep, wide rivers. All of these natural barriers make the small Kingdom adept in preventing invading armies to taking their lands. The Rich soil is claimed to have been awash with the ichor of Teysura during the Godling Wars.

Legends say that the protective cliffs and rocky outcroppings were made by the anguish of Korlez following the injuries to Teysura.

Like many of the duchies of Esteparon, the fiefdoms Bærney are ruled by the nobleman, . For thousands of years, they have feuded with each other over land rights. The contested, fertile lands of the northeast hold the greatest wealth.

King Arzhel reclaimed all the lands of the old kingdom of Bærney, naming himself king 17 years ago. He has been building alliances with the Lords of Alaredél and looks to continue growing his power.

The backbone of the kingdom’s wealth is the resurgence of growth of Täsheran grapes. Many of the ancient vines withered and died of disease thousands of years ago. Without explanation, the vines strength was renewed and the yields have been abundant, allowing King Arzhel to raise funds to build his armies. The grape seeds are the source of the alchemical, Oil of Vralithe.

The eastern plains produce an abundance of grains and other agricultural products. These lands more than enough food for the kingdom and allow for exportation of some

The Düns are the kingdoms other notable feature with their golden, ochre, and orange-hued, deeply eroded sandstone cliffs and outcrops. The western düns produce several large salt mines, as well as, an abundance of iron, manganese, copper, lead and tin. Most of the hard metals can be found in the Harfœrt Dūns between the mighty Emsmōr and Lanholm rivers. Moderate amounts of silver and trace amounts of gold have been mined in the Körghezh Dūns.

The capital and oldest city in the region. It’s commerce and religious structures center on the banks of the Emsmōr River and along the King’s Bridge. Rising hills to the north house the great halls of noblemen of Bærney while the southern stretches of the city house the lower classes.

North of Kingswood in the hills near the rivers’ fork, this city is a full day’s journey north from the capital. Serving mainly as a trading post and waypont for travellers, Æbhentúr has grown ever larger and seedier population. The local lord must rule with intolerance to keep the fragile peace within the city.

The large city guarding the southern timber lands of Kragenwood from the Emsmōr River to the west and the Wütsor River to the east..

This town sits on the eastern banks Emsmōr River in the southern Brāsgh Dūns. The young, popular lord is rumored to have wealth beyond the station of the remote town.

This ancient fortress guards the western entrance into the kingdom. The rugged warriors of these lands patrol the dūns with leave to serve justice as they see fit.

The king’s castle built upon the western shores of the Emsmōr River.

Another city that grew as a trading post for the

The barony was the original estate of the King. Having gathered vast wealth from the sale of the much sought after wines of this region, he raised an army to consolidate power and take the throne.

A small village in the south of the Harfœrt Dūns.

Seaside city guarding the shores of the Rynin Sea southwest of Bærney.