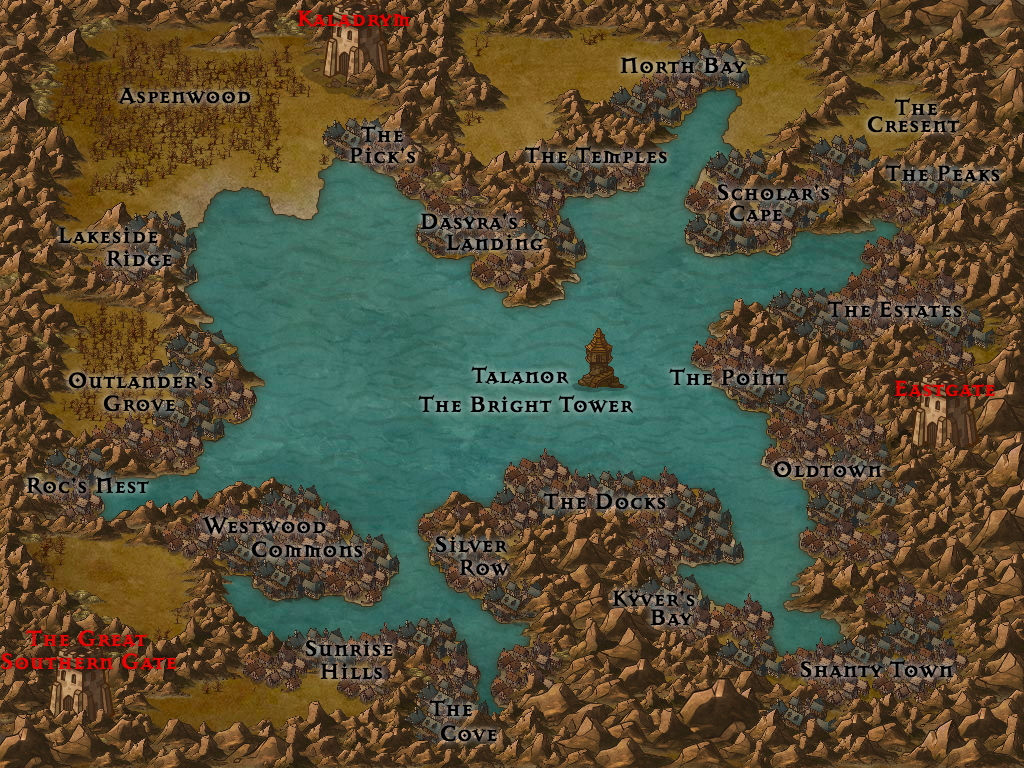 The Vale of Talanor is set deep in the northern reaches of the Shadow Mountains. The Vale was founded by Bærwynnd upon finding the vale deep within the Shadow Mountains and building the Bright Tower in 315 E.C. The first established culture arose from the remnants of workers that had constructed the tower. Working the area for resources needed by the tower inhabitants, the human residents built was is now known as Oldtown.

Although the Vale is set high in the northern Shadow Mountains, the temperature had always been abnormally temperate with warm summer days and snowy, cold, unbearable winter nights.

Over the course of its history, the Vale of Talanor has seen several types of government. Locals ruled themselves with a elder council deciding matters of law and order. After the founding of the Temple of Dsyra, several religions followed the Shining Star to the Vale bringing their holy warriors with them. Very quickly, the residents looked to the various churches to pass judgement and maintain the order.

In 1204 E.C., the noble house of Haldidrach in the north of Esteparon came to the Vale, having been forced to renounce their title and land claims by the King of Esteparon. They commissioned a great fortress to be built in the vale by dwarven architects. House Haldidrach died out not long after the revolt against the king. Since then, the First Hazard is considered by many to be the defect ‘leader’ but he has left much of the control of the city in the hands of an elected senate.

Following the Shaping, all forms of government failed until the arrival of the refugees from Earthenwork. While Arrington, as the regent for Bærwynnd, has complete control of the Bright Tower, Cássyon Edelmahn of Haemil is currently charged with organizing the defenses of the Vale. His first priority is to secure the Point as a base of operations, as well as, accommodations for the refugees.

With resources somewhat limited, the Vale of Talanor has been a destination for shippers of goods for millenniums. While most things can be found for sale somewhere in the Vale, prices can be abnormally high. Due to the need for substantial trade, wealth has trickled down to the middle/working class although many of the noble families hoarded treasure in the Vale due to its defensive position set in the mountains with restricted access by armed forces. There is a large homeless & destitute population, primarily focused around Shanty Town.

Of course, following the Shaping, the local economy has collapsed and a strict barter system is currently employed.

An ancient pinewood forest in the northwest of the Vale.

The fortress of Bærwynnd, the Diviner. This venerable human is the First Hazard of Talanor.

Legend says that somewhere in this southern cove of the Lake the untold treasure has been hidden away. Before the Shaping, the Cove was dominated by the shipbuilder, Mirdenthà.

The Crescent is a barren valley in the shape of the waning moon. Several deep canyons open up the valley to untold depths.

Not long after the building of the Bright Tower, a visiting priestess of Dasyra witnessed the falling of a star upon the southern most mountain of the area. Finding a glowing rock at the sight, a Temple to the goddess was built upon the site.

The Docks is the largest port on the Lake. The entire section is built upon mortal-made piers extending into the lake.

The eastern entrance into the Vale of Talanor, Eastgate is a ruled by a council of noble families and supported by a massive standing militia along with the clerics of Mylesar. Deep beneath Eastgate lies the abandoned lower city overrun by fire goblins and flame drakes.

This section was built by the noble families of Esteparon for personal estates while visiting the Vale of Talanor. The section is also the home of the Senate Dome.

Built by the dwarves during the Reign of Tranquility, this was the original entrance into the Vale of Talanor. It was built for a noble family of Esteparon who’s line died off. It is now managed by a colony of gnomes beholden to the Hazard.

A clan of dwarves led by Kyver, came to Talanor upon hearing the legend of Mithril within the Shadow Mountains. They crossed through the East gate and established this section.

Built in the last 400 years, this new section of the Vale was due to the increased wealth of the merchant guilds. The dwellings are built into the sheer cliffs along the lake.

This prosperous section of the Vale controls the fertile farmlands to the north.

The oldest section of the city of the Vale, Oldtown is surrounded by a fortified, thirty foot thick wall with two original gates leading to the Bright Tower and to Eastgate. Over the years, many additional openings have been constructed. Many noble families throughout Esteparon have residences here, although they also have larger dwellings in the Estates.

This home to many different humanoids, even those often held with suspicion, were granted a Senate seat at the behest of Bærwynnd following the Second Gathering of Hazards.

An isolated Section of the Vale, the Peaks is built atop several large bluffs and plateaus leading into the Shadow Mountains.

This are is a mix of old and newer dwellings, many of which are build on top of each other. Originally built for the dwarves workers constructing Kaladrym, it was the largest concentration of halflings and gnomes of all the Sections.

Once a seedy section of town, the Point has ben ‘cleaned up’ on several occasions since the founding the Vale. However, all attempts have retsulted in failure with corruption and crime quickly resurfacing. The Point has burnt on a few occasions; most recently in 7453 E.C.

This scenic castle was originally built by the King of Esteparon in 2715 E.C. The castle fell into ruins until it was rebuilt by Killian, Lord of Kashmere, although he infrequently resided in the castle.

The section of the Vale of Talanor is home to several vast libraries that support the multitude of wizardly scholars that frequently come to the Vale. Several reputable inns cater to these travelers along with the pilgrims to The Temples and Dasyra’s Landing.

Shanty Town is built upon the ruins of. section of the Vale that was revolted against the Duke’s rule following the fall of the Kingdom of Esteparon. The small shanties and lean-to’s create a twisting labyrinth of streets and alleys. In the center of Shanty Town, is a ruined tower dating back further than the Bright Tower. Warm to the touch, the resident’s avoid the tower at all costs, utilizing it as a place of banishment for known criminals.

The merchant section of the Vale. Most things can and will be found for sale here.

Known to the dwarves as Kal’anakrun, this complex of winding tunnels and towers is ruled by the Archon of Thaedymar. It is the southern entrance into the Vale of Talanor and also the most northern entrance

This human only settlement was founded following the establishment of the senate. Although their ceding from the rule of the Bright tower failed, the residents sealed themselves away from the rest of the Vale. Although the racial tensions had subsided in the last 1,000 years, rumors of a society of humans still bent on racial dominance still persist.

The home to many temples and shrines to the gods.

A vast labyrinth of caves and tunnels connecting all of the districts of the Vale of Talanor. Different complexes within the Underlake are controlled by various, competing factions and guilds.

This quiet community services much of the hardwood resources to the rest of the Vale. Many craftsman and merchants live in this nondescript settlement to the east of the remnants of Westwood.

by: JohnGrady
See All Pages